A chinese 43rumors reader wrote me he saw the E-P1 and there is a video mode on the top dial button. He want tell me more…

Thom Hogan is one of the most famous Nikon reviewers (bythom.com). Normally he is only active inside the nikon dpreview forum, writing very interesting articles. But now he made a small jump into the Olympus dpreview forum. Maybe he is ready for the E-P1? ;)

“I almost always have big pockets available to me. Either a vest or a jacket or sometimes even cargo pockets on my pants/shorts. Likewise the small fanny pack I wear when running/biking. If the camera and lens combos I want fit there, I have a winner. The LX3, G10, Ricoh G200, even DP2 all fall into that category. All have liabilities that I think m4/3 would solve, though.”

“It’ll also give Oly the first real burst of significant growth and market share change they’ve had in a long time.”

“So what would I do if I were Oly?

2. Followup to the E-3 needs a big size reduction (about the same amount as I need to reduce personally ;~).

3. Introduce a mFX (full frame). Small size, high performance full frame. Nikon and Canon have left that hole for anyone to exploit.”

I just want to say that Thom is one of the most serious, competent and friendly people I have met inside the dpreview forum. His website is worth visiting!

Inside slrclub (a korean forum) there is a post from a person who claims to have seen the E-P1.

1) “And live view through the image shake correction check ... Unlike existing DSLR live view…”. I

3) “Still should be a silver color .. yellow leather…”

P.S.: May some korean reader can help us and make a small summary. Not everything is understandable with the google translation!
And thanks “wildone” we have a better translation:
.
Summary of the article and the comments…

1. The design of E-P1 is quite different from previous mock-up model. Lens design remains same.
2. Image stabilization
3. Live-view
4. It looks slightly bigger than orange mock-up model.
5. Even with 17mm lens mounted, It doesn’t look that big.
6. Grip of the camera feels good. Right side of the camera is designed to fit into hand.
7. steel(not still :)) glossy silver. Steel glossy surface has replaced orange band of the mockup model.
White pearl color.

We receivedÂ  this from an anonymous sender.

At first we were sure it was a joke/ photoshop job. The E-P1 name sounds familiar to most of us because it was the preproduction name of theÂ  E-3. But then Olympus came out with that teaser…

What with all the not-so-subtle PEN vibes Olympus has been sending out, we are no longer treating this image as a joke!

One more confirmation comes from Korea: 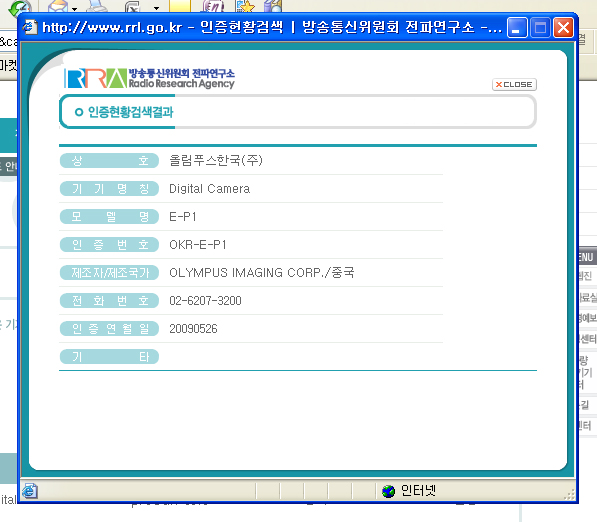 In the the past month we released a lot of rumors and now the time has come to make a small summary! At the moment, it doesn’t matter whether you believe us or not. Keep the rumor summary in your mind and in a few weeks/months you can easily see if we were close to reality. But be warned! We are a rumor website and we do not get information from Olympus or Panasonic themselves! There are two main reasons why we could be wrong with rumors:

1) Most rumor sources are new. Â Proof of their veracity will only come with time. With time we hope to become better and better with our “predictions”.

2) Olympus and Panasonic themselves sometimes change the plan. It could be that a rumor is true in the time we posted it, but changes before the real camera or lens is released. An example has been the supposed built-in flash for the Olympus m4/3 camera. We first predicted that there will be a flash but now it seems that Olympus have changed their plans and we will “propably” not see that built-in flash.

3) No built in flash

6) A second more featured camera released end of the year

1) E-3 successor planned to be released this year.

In summary these are 18 rumors. If we get over 10 rumors right we would be incredibly happy.

1) To gather attention to Olympus and Pansonic products. They make a lot of great products and we believe we have to break the Canon-Nikon media monopoly. Of course our website is only a minimal contribution, but every step counts!

2) Then, we have some wishful thinking. We hope our readers reactions can have some influence on Olympus and Panasonic’s products. Your comments and reactions matter!

1) Make this website financially sustainable. We wish to get some earnings in order to cover the costs and some private time investments. We have all a real job and a real family. It becomes easier to work on that website on weekends and nights ifÂ  people support us.

2) To not only become the rumor refrence number one for Panasonic and Olympus but to creata some real photographic contents. An example? We are planning to make a professional video test between the GH1-Canon 5d-Nikon D90. Than we plan to use the Olmypus micro four thirds camera for a real work in Siberia.

What should be your role?

1) Critizes us. As you may have noticed we listen to you and try to make things better.

2) Report rumors! You can do it by emailing us (43rumors@gmail.com) or by becoming a real 43rumors editor.

3) Support the website by starting your shopping from here (amazon,calumet,bhphoto,adorama and J&rR). That’s free to you and we get commission for that!

4) Put link to us in your forums and blogs!

Many thanks you all!