Our sources pointed the June 16th as the right date for the Olympus announcements. Well they were one day out;)

That rumor was posted way back (March 29th !) so I would say we were REALLY CLOSE with our prediction!

Read our rumor from March 29th !

P.S.: If some japanese 43rumors friends wants to send us proper English translations…we would be grateful!

Kumatax sent us a translation. Thank you K.!!!!

The MicroFourThirds machine announces on June 15th. President Kikukawa of Olympus declared it–The philosophy of film camera “PEN” is succeeded to. To externals different from the mockup

Olympus announces the MicroFourThirds machine that becomes the first in this company on June 15th. The sale is the first week of July. Olympus is disclosing the content of the results briefing concerning the period on March, 2009 to Web with the voice file, and Kikukawa president is clarifying it in that.

The MicroFourThirds machine to release is considered to be the model that reference exhibited a mockup at in Photo Imaging Expo 2009 (PIE2009). Â It announced release of summer, 2009 previously in PMA09. In addition, it is said that the appearance considerably changes because the model that exhibited in PIE2009 is not an end product.

It was introduced with a camera with the philosophy of the “PEN” by the briefing session. The new camera is with the model that succeeded to the concept of half-size camera “PEN”.

Mr. Kikukawa explained as follows. “The users of the compact digital camera, a little over 30% want to use the DSLR. However, do not make step-up to the DSLR by the reason of a price, size, weight, difficulty of the operation. I make these users a target in the future. I will plan the revival of the picture business in future by making efforts in the MicroFourThirds system”

Hmmmm! This rumor starts with a big ‘hmmmmm’! We are confident that the first micro four thirds camera from Olympus will be SILVER. However we found indications that the same camera may come in two different colours! Zone 10 predicted a silver-chrome-black camera for June and another model in black for December. However, this might NOT be exact.

Our sources have been telling us since months that the camera will be silver. But then last week one of them asked us: ” Do you like Leica?”. “Oh yes we love Leica; but those cameras are far too expensive for most of us!” He then continued, saying, “You will probably see a silver model and a different coloured model.” We at first thought he was talking about the second camera which could be coming in December. But now rumors are suggesting to us that there may be two different coloured cameras in June!

We are getting closer to the summer release and we are receiving more and more rumors. We know most of them could be “spam”, we have to learn to classify this “news”. So it is quite difficult to make exact predictions. Today we can be 90% sure that one camera will be SILVER and there is a 50% chance to see the same camera in a different look ;)

We promised you a half rumor because we have no idea if there will be really a second camera! Leica Leica Leica, hmmm, what do you think?

P.S.: Our server SUCKS! Sorry for every inconvenience. It isn’t our fault! 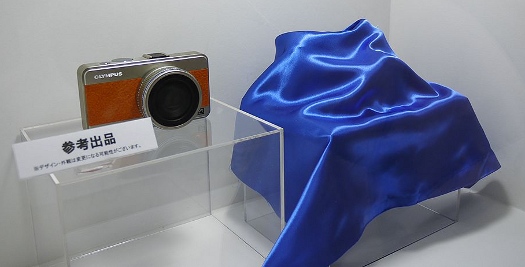 We are sure everyone has in his mind this photo, the secret Olympus camera covered with a blue cloth. We already made the prediction that the final REAL camera will look different than the orange mockup. Now we have the first REAL confirmation give by a Japanese photographer. According to Kimio Tanaka, photographer and camera technology writer, the camera wore blue velvet was a real prototype very nearly finished! He said he couldn’t believe that story at first. But it was true.

Link to his homepage:

Thanks to N.M. for sending us the link!

UPDATE: It is rumored to be silver.

UPDATE 2: Our main sources told us that under the cloth they have the final version of the micro four thirds camera!