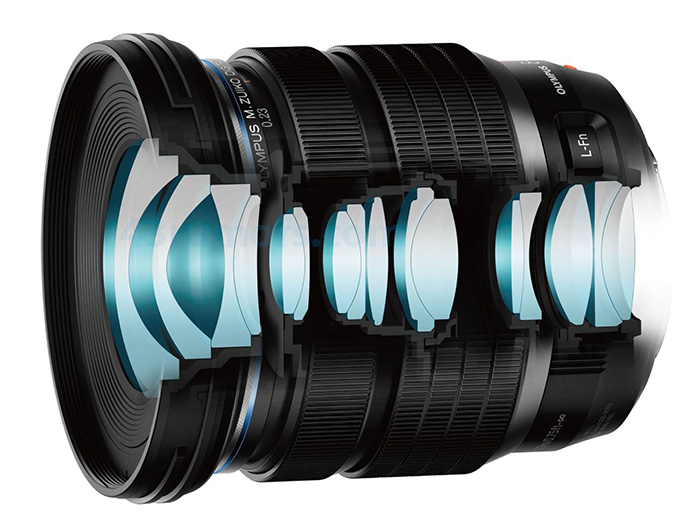 Here is the press text (google translated from the original Japanese):

・ High optical performance unique to the “M.ZUIKO PRO” series Thorough attention is paid to optical performance, and special lenses such as super ED lenses, ED lenses, and EDA lenses are used in the lens configuration of 16 elements in 10 groups. It thoroughly suppresses various aberrations such as chromatic aberration, and realizes high-resolution and sharp depiction unique to the “M.ZUIKO PRO” series over the entire zoom range. In addition, the adoption of his large DSA lens significantly reduces sagittal coma aberration. Even with the aperture open, it has excellent point image reproducibility from the center to the periphery of the image, and is very useful for night scenes and starscapes. In addition, the ZERO coating and optimized lens shape significantly reduce the occurrence of ghosts and flares during backlight photography, achieving sharp, high-definition depictions. Since the open F value does not change in the entire focal range, you can easily control the exposure even when shooting with zooming or shooting movies.

・ Maximum shooting magnification 0.42x close-up shooting performance You can enjoy powerful macro shooting with a maximum shooting magnification of 0.42x, which is close to half macro. The shortest shooting distance is 0.23m, which is constant over the entire zoom range, so you can easily adjust the angle of view by operating the zoom ring after approaching the subject. It also supports a depth-of-field composition mode that combines in-camera photos with a deep depth of field that are in focus from the front to the back, enabling a variety of macro expressions.

・ Durable performance that is safe even in harsh environments The highly reliable “M.ZUIKO PRO” series has achieved excellent drip-proof performance, dust-proof performance, and -10 ° C low-temperature resistance equivalent to IPX1. By combining with the OLYMPUS OM-D E-M1 and E-M5 series, you can shoot with confidence even in harsh environments such as rain and snow. In addition, the front lens is coated with fluorine so that even if it gets dirty, it can be easily removed with a blower or cloth.

・ Although it is a super wide-angle lens, it can also be fitted with a filter. It is possible to attach a filter to the tip of the lens, even though it is equivalent to an ultra-wide angle of 16mm. By installing a PL filter with a filter diameter of 72 mm and his ND filter, he can enjoy shooting in a variety of expressions.

・ “Manual focus clutch mechanism” that can instantly switch from autofocus to manual ・ L-Fn button is placed on the side so that you can change the setting while holding it with one action with your thumb.