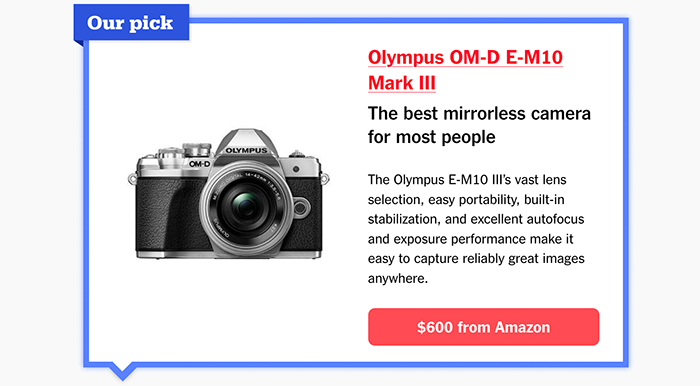 TheWireCutter reviewed the latest mirrorless models and concluded the Olympus E-M10III is actually your best choice:

The Olympus OM-D E-M10 Mark III doesn’t represent the absolute pinnacle when it comes to image quality, but it does capture great-looking images, and it excels in other areas that matter more when you want to get the perfect shot. It’s compatible with more than 100 Micro Four Thirds lenses that all work with its effective built-in image stabilization, which minimizes the effects of shaky hands for clearer images. And its small size means you’re more likely to bring this camera with you than a bulky DSLR or even a larger mirrorless camera. The camera’s autofocus (AF) system locks on to subjects quickly and accurately and remains accurate even in dimly lit situations that cause any AF system, including this one, to slow down.

Although the auto modes are reliably great, the E-M10 III also has manual control knobs and buttons and a tilting touchscreen, which make this model one of the better-handling cameras in its class. Its built-in Wi-Fi lets you transfer images to your phone to share with your family, friends, and Instagram followers. You can also use the Wi-Fi to trigger the shutter and change most of the settings from across the room using your smartphone. And despite its great performance and advanced features, it typically costs a couple hundred bucks less than its closest competitors.