“If you currently are looking for a small interchangable lens camera with EVF capability then the the GF1 may well be the best choice currently available.“

Panasonic GF1 on street review …..ohhh! what kind of language is that? Thai! :)

And they also finished their E-P1 review: “It’s clear from the image analysis of our test shots that the Olympus E-P1 has more to its appeal than good looks and a fine form...”

Mark (the owner of which43.com) posted many GF1 versus E-P1 comparisons.

For example take a look at the shutter noise comparison (first set of noises is the GF1, second is the E-P1)

He says “the GF1 is slightly louder and I find the noise more intrusive.” You can download the mp3 audio at http://which43.com/?attachment_id=87

Many people is talking about the new Panasonic GF1 and we thought we should summarize you the most interesting forum threads:

3) First US people is receiving their GF1 directly from Panasonic. Amazon

is also starting their shipments. The waiting list is long so many have to wait days or weeks to get the GF1.

4) We havn’t got any info from Europe. I still havn’t heard of any european who got the GF1. Strange that Amazon Germany

has not even listed the GF1!
Amazon UK

says the GF1 will “usually dispatched within 2 to 5 weeks“. It also says that the Panasonic DMW-LVF1E External Live Viewfinder for Lumix GF1

is due to be released on September 30, 2009. So in UK you can get the Viewfinder before the camera :)

Photoreview Australia made a very detailled review of the GF1. One more time they have proven that they are very quick in testing new product (the 20mm f/1.7 lens has also been reviewed!).

The GF1 showed impressive image quality and “…All these factors provide reasons for nominating the GF1 as an Editor’s Choice in both the Advanced and Four Thirds System categories.” 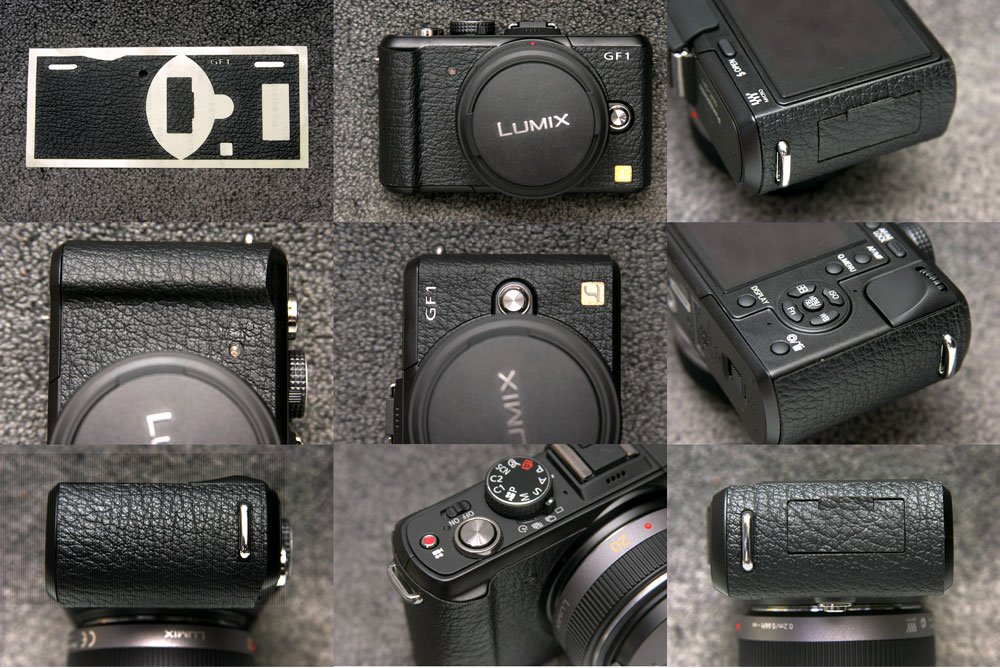 Image of a GF1 Leatherette Skin from http://aki-asahi.com/

Found a summary of the review on dpreview :

they only had a beta firmware on it and definitive measures are still waited; but here is a sum up of what they already wrote about it :

Resolution at low iso : very slightly less than the (but the E-P1 was slightly surpassing the GH1 and the D90, two winners of the category), GF1 is slightly superior to the G1. So, indeed, very good.

Noise at higher iso (measured with standard Noise reduction on). It seems to be somewhat better than the E-P1, but at the cost of loosing more details, especially after 1600 iso. Chasseur d’images seems to put the GF1 above the E-P1, at least for 400 and 800 iso.

AF : they weren’t yet able to test, because they only had a beta version of the firmware. But from handling it is good, somewhat like the G1-GH1.

The viewfinder is the real problem of the GF1. The DSLRs users are accustomed to aim with a viewfinder stuck against their eye and will be concerned by an lcd display. A “true viewfinder” is much more effective in bright sun.

Comment : that first paragraph is exactly the same they wrote for the E-P1 but then, they add :

The EVF could be a solution, but it is cumbersome and of a very “middle of the road” quality : the viewfinder on the G1 & GH1 is much better.

Here is the problem : the GF1 is designed for aiming with the lcd. Either you accept this constraint (which is that of every compact camera) and everything is fine, or you don’t accept it and the body looses 90% of its interest.

Final verdict : Compacts with large sensors are developping, but still rare : this specialized body comes with important limitations of handling. In its category, the GF1 is very satisfying and would earn five stars (it was the same for the Olympus E-P1). But one should also consider it like any other body and compare it with the rest of the market’s offering, then four stars are deserved.

And here is what they say concerning the external viewfinder earlier in the review :

An external EVF is available (the DMW-LVF1). You slide it in the flash hotshoe and an integrated connector allows the exchange of all informations. The display module is a very ordinary model (202.000 pixels). The use of the G1/GH1 HD module was causing technical problems it seems (and also probably costing a lot). Under these conditions, the EVF doesn’t appear very interesting. IF you are interested in an EVF, you should rather look for a Lumix G1 : a much less expansive body offering a much better viewfinder.

(translated by myself, trying to stay as near of the original text published in Chasseur d’images as I could, but provided without warranty, given my English knowledges)“

You can choose between red black and silver models available with both kit lenses (20mm f/1.7 and 45mm f/2.8 macro lens). Amazon UK is not selling the single lenses for now…