Cosina Japan officially announced the Super Nokton 29mm f/0,8 MFT lens! Preorders will be available in December for around $2,000. 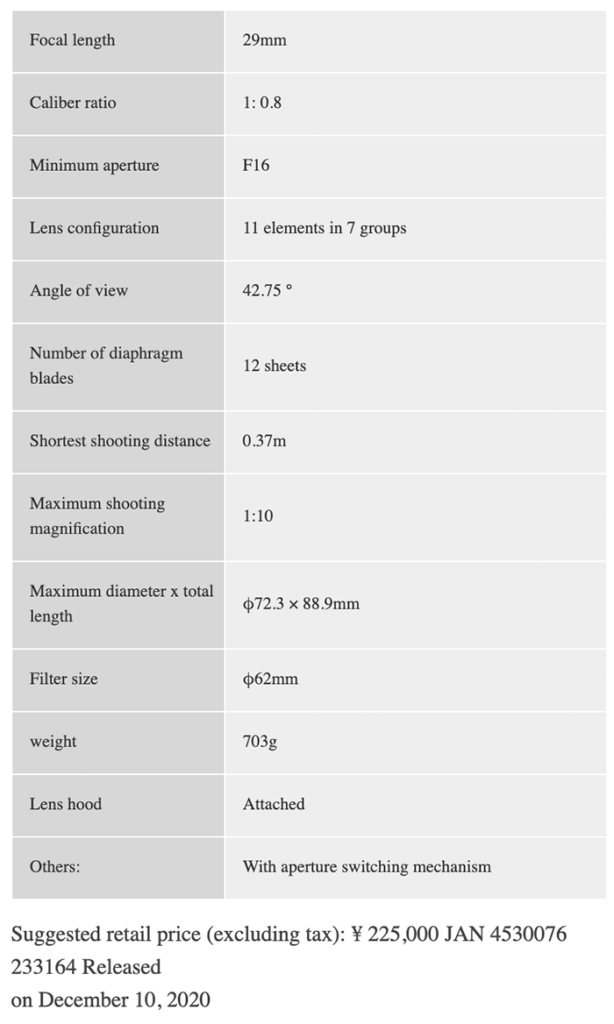 The Nokton 29mm F0.8 is a standard lens designed exclusively for Micro Four Thirds. Achieves the brightest F0.8 * as an interchangeable lens for photography currently on the market. The angle of view of the diagonal 42.75 ° (equivalent to a 58mm lens in the 35mm format) is the same as the standard lens with a large aperture of the past, and you can enjoy shooting with a large blur due to the ultra-large aperture of F0.8.

Main features:
● Amazing large aperture With a large aperture with an
open F value of 0.8, it is possible to shoot with just “as is light” even under extremely low light conditions. It is also the best lens for shooting with shallow focus and beautiful bokeh when the aperture is open.

● Ultimate lens design
By adopting a uniquely developed GA (grinding aspherical surface) lens for the optical system, it is possible to design with a high degree of freedom using a glass material with a high melting point that cannot be used with a glass mold aspherical surface. While achieving an ultra-large aperture of F0.8, high image quality can be obtained from the widest aperture, and a compact size and weight that are easy to handle are achieved.

● Various expressive power When the
aperture is wide open, the straightforward and gentle bokeh emphasizes the focused motif and creates a three-dimensional effect. If you stop down the aperture, you will get a very sharp image, and you can express a variety of photographs with a single lens. The number of apertures is 12, and the out-focus part of the point light source is depicted in a neat shape.

● Manual focus that enables reliable focus operation
By adopting an all-metal helicoid unit that has been processed and adjusted with high precision and high-quality grease that produces an appropriate torque, focusing with a smooth operation feeling is realized. Allows for delicate focus adjustment.

Here are the image samples: