That’s because scanning negatives into digital files has always been a PITA, no matter how you do it. Sure, you can farm the job out, if you don’t mind sending irreplaceable negatives off to parts unknown. Or you can buy a scanner and do it yourself… but cheap scanners produce, well, cheap results. Better scanners are slow, inconvenient, and require a lot of post-scan touchup — especially if you’re scanning silver-based black-and-white film, which defeats the “auto-fix” routines that many scanners promise.

(Quick explanation of why: color neg and slide films, by design, transmit infrared light, so they won’t heat up during enlargement or projection. That lets the scanner distinguish between a small detail and a small chunk of dirt on the neg… a small detail will transmit IR, but a chunk of dirt won’t. Silver-based films, on the other hand, block infrared, so the scanner can’t tell details from dirt.)

So when the Olympus E-M 5 Mk II camera was announced, with its clever sensor-shifting “high res shot” mode, plenty of us wondered if we could use this feature to get 40-megapixel JPEGs (or 64-megapixel raw files) of film negatives. For many types of subjects, high res shot mode is pretty limited, because it requires the subject to be absolutely motionless during its eight-exposure cycle — but that shouldn’t be a problem when copying negatives, right?

So I tried it. Here’s what I found:

I decided to test using a medium-format black-and-white negative, since these are capable of excellent digital quality but are often problematic to scan.

Building a rig to photograph these negs with the E-M 5 Mk II would have been easy if I owned a macro lens — but I don’t, and I didn’t intend to buy one until I was sure this process would work! So instead I had to cobble together a macro setup using some inexpensive, generic, non-coupled extensions tubes I happened to have. Even the shortest extension available with these tubes was too long to cover a full 6x6cm negative with most of my lenses; the only one that would work was my 75mm f/1.8 Olympus, an excellent lens for general photography, but not necessarily ideal for macro shooting.

Another problem was that since my extension tubes aren’t coupled electronically to the camera, I couldn’t just set the lens to my desired aperture and focusing distance. Instead I had to resort to an old trick: mount the lens directly on a camera, use the manual focus and DOF preview to get the settings I wanted, and then immediately remove the lens without turning off the camera. This trick let me mount the lens on the extension tubes without losing my previous settings.

I mounted the camera on an old-fashioned copy stand I happened to own, and the photo part of the setup was done.

For illuminating the negs, I had the idea of using my iPad. Sure, there are lots of less expensive and probably brighter ways to do this, but I already had the iPad, and it can generate a large area of bright, even light. Several free apps are available for turning it into a lightbox; I used one called Leuchtpult LT.

I placed my test film into the medium-format film holder that had come with my scanner, and laid it on top of the iPad. Problem: the distance between the film and the iPad was so short that the iPad’s individual LEDs were within the plane of focus, causing a grid pattern to appear behind the image.

Solution: I put a translucent plastic refrigerator container on top of the iPad, and laid the film holder across that. Sounds crude, I know, but it worked perfectly! The plastic container separated the film enough from the iPad that no patterns were visible. And unlike a flatbed scanner, this setup leaves absolutely NO glass surfaces near the film plane — so, far fewer dust and cleaning headaches.

‘Scanning’ with the camera

To test the setup, I chose a black-and-white negative I had made in 1993, using a Bronica 645 camera. It showed the members of the Ballet Omaha dance company perched on a Union Pacific “Big Boy” locomotive (long story…) and contained a wide range of tones and lots of detail. 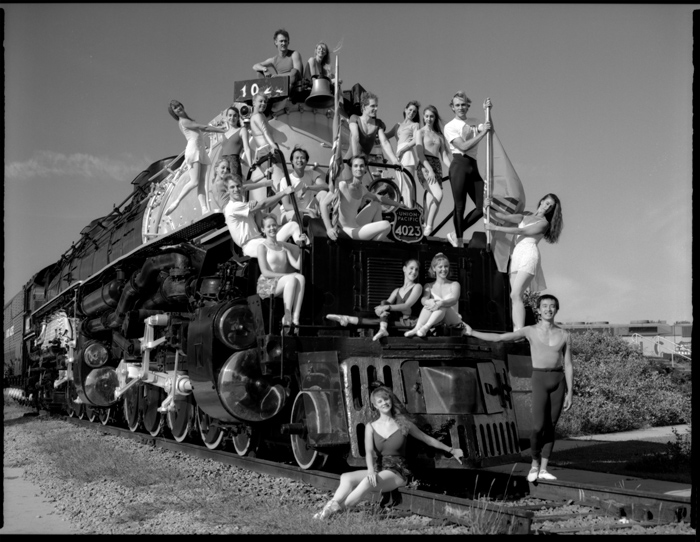 I focused the E-M5 Mk II on the negative using its 10x magnified critical focusing view and the swiveling LCD viewfinder. Focusing on the grain structure of the film was easy at this magnification. I adjusted the exposure by using the viewfinder’s “blinkies” feature, which highlights over- or under-exposed areas, picking a midrange value that avoided blinkies at either extreme.

I had chosen the raw+JPEG option, so I came away with both a 16.7mb JPEG file and a 104.5mb Olympus ORF raw file. I opened the raw file in Adobe Photoshop CC 2014, using Olympus’ recently-released High Res Shot Raw File plug-in.

Comparison scan with a flatbed scanner

After making the camera shot, I transferred the film holder to my Canon 8800F flatbed scanner and launched Hamrick Software’s Vuescan to perform a scan. I used the scanner’s full 4800-pixel-per-inch resolution setting and saved a 179mb TIFF file.

To compare the two images on an equal basis, I downsampled the scanner image to match the camera’s 6560-pixel width. This left me with two approximately-61-megapixel images to compare.

I didn’t spend much time optimizing the highlight and shadow values, since at this stage I was mostly interested in detail and sharpness. Both images had plenty of latitude for adjustment, and I’m sure I could have gotten similar tonal ranges from both.

Let’s have some fun: Instead of telling you my conclusions first, I’ll show you the images and then reveal which came from where. Both are pixel-for-pixel crops of the locomotive’s number plate: 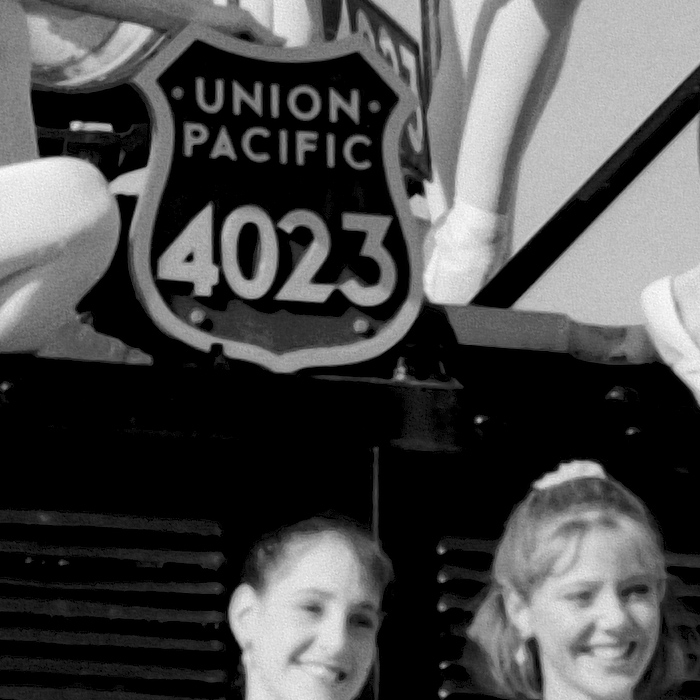 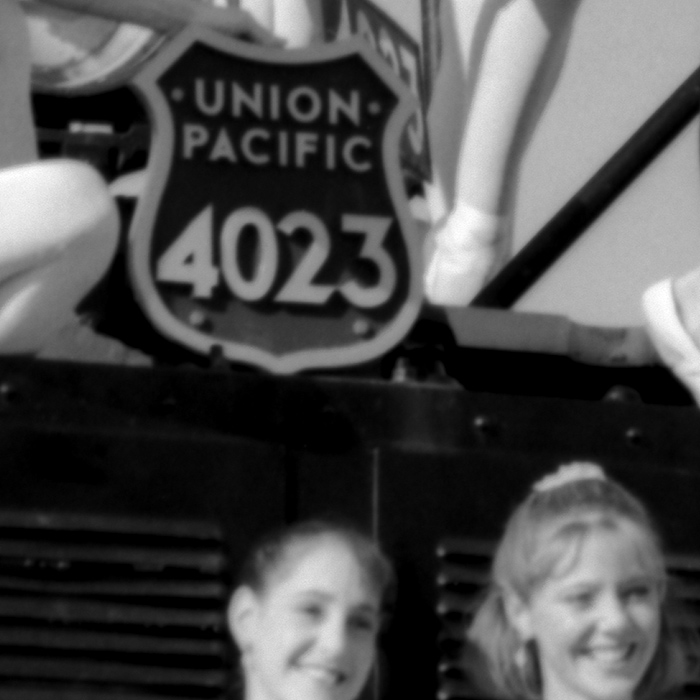 So, what do you think?

Would you be surprised to know that Image A came from the E-M 5 Mk II? It did!

Even with my improvised copying setup and non-optimized, non-macro lens, the camera copy (to my eyes) yielded a much sharper-looking, more-detailed result than the scanner copy.

What’s more, the full-size camera image had much less dust and required much less cleanup than the scanner image. That won’t surprise darkroom old-timers: a scanner shines a concentrated beam of light through the film, much like a condenser enlarger — and condenser enlargers were notorious for exaggerating dust, grain, and scratches. My copy stand rig, with its wide, diffuse light source, was more like printing with a diffusion enlarger — much more forgiving of negative defects.

The time difference was striking as well. I could clean, position, and expose a negative in the copy stand in less than 30 seconds, while the scanner took more than six minutes exclusive of prep. If you’re scanning all the frames on a 12-exposure roll (for example) that’s the difference between a 10-minute job and more than an hour of labor.

Of course I’m sure there are better, faster scanners than my Canon 8800F — and if you have one of them, good for you. But if you have an “average” scanner like mine, and if you’ve been considering the E-M 5 Mk II, the ability to make high-quality ‘scans’ with it is a nice additional bonus to take into consideration when deciding whether or not to buy.