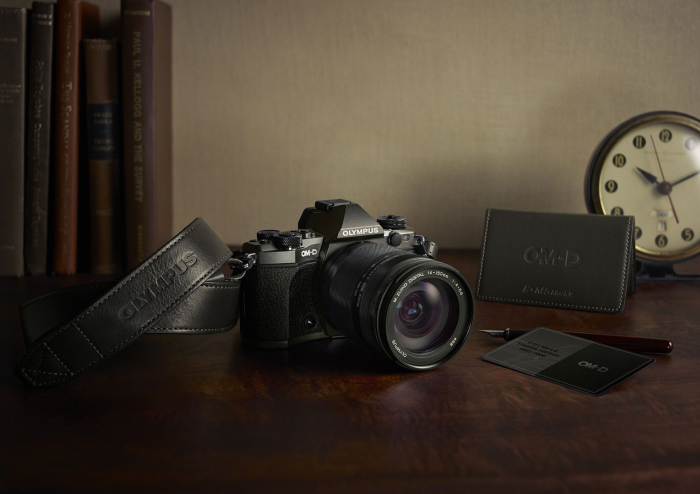 Southend, 12 May 2015 – For fans of landmark high-end cameras, the 1994 OM-3Ti is an all-time classic, and now collectors can acquire a contemporary homage to this titanium-clad SLR icon: a limited-edition version of its most recent OM-D descendant, the TIPA award-winning OM-D E-M5 Mark II*. The beautifully redesigned E-M5 Mark II will be available in a distinctively retro, titanium-tinted body that evokes the golden age of the original Olympus OM series, a period that laid the foundations for the flagship Olympus Micro Four Thirds cameras of today. In addition to the titanium colour, the Limited Edition differs from the regular model with a special OM-D-branded leather strap, an owner’s card bearing a quote from the legendary OM designer, Yoshihisa Maitani, and a premium-stitched leather case for the card. A number between one and 7,000 will appear on the other side of the card, as only 7,000 of these cameras are due to be made. The OM-D E-M5 Mark II Limited Edition will be available from June 2015 as the body only, or in a kit with the all-round zoom M.ZUIKO DIGITAL ED 14-150mm 1:4.0-5.6 II lens. The body will retail for £999.99. The lens kit will cost £1349.99.

One portable icon deserves another

Although some 20 years have passed since the launch of the OM-3Ti, the OM-D E-M5 Mark II Limited Edition has much in common with its illustrious forebear, and not just visually. Both offer serious photographers a more portable, high-grade alternative to bulkier SLRs. The 1980s and 90s cemented the OM series’ reputation for compact, lightweight, go-anywhere system cameras as well as innovations such as the air damper that muffled the shock of mirror movement or the multi-spot metering mechanism beloved of professional owners of the OM-4. The E-M5 Mark II continues that tradition with its minimal dimensions, rugged build, and the world’s most powerful** 5-axis Image Stabilization system. This – as the TIPA award jury pointed out – makes it ideal for high-speed, spontaneous photography on the move (“a breakthrough technology that handles virtually every shooting situation.”).

A titan in titanium

Beginning with the launch of the OM-1 in 1973, Yoshihisa Maitani’s breakthrough series married form with professional-grade function, and the OM-3Ti was the beautiful – and practical – culmination of this design philosophy. Its titanium plates were not just lighter than aluminium, they were also more resistant to corrosion and heat, and fully six times more robust. Visually, they ensured the OM-3Ti stood out from every other camera available at that time.

The OM-D E-M5 Mark II Limited Edition pays homage to this heritage with a striking new colour and a number of unmistakable OM design cues. In addition to the familiar, angular OM contours, prism mount and low centre of gravity, the new camera woos collectors with its distinctive titanium-style finish as well as the exquisitely knurled dials and shutter release. From the perspective of its owner, the controls ooze state-of-the-art optical precision.

The design of the OM-D E-M 5 Mark II Limited Edition may hark back to the 80s and 90s, but in every other respect it is very much a cutting-edge example of the best optical engineering on offer today, as acknowledged by TIPA when they singled out a number of features (other than the 5-axis IS) for praise: “Housed in a dustproof, splashproof and freeze-proof magnesium alloy body, the 16.1 Megapixel 4/3 Live MOS sensor and TruePic VII processor of the Olympus OM-D E-M5 Mark II deliver a wide array of creative imaging options and an ISO up to 25,600. The camera sports a 2.36 million-dot Electronic Viewfinder and a 3-inch 1,037K-dot swivel touchscreen LCD monitor. Its extremely quick Fast AF boasts an 81-point area, excellent low-light performance and tracking AF, delivering fast AF for the camera’s 10 frames-per-second rate at full resolution. The camera also has a special ‘High-Res Shot’ option that is said to deliver resolution equivalent to a 40 Megapixel sensor by combining 8 shots into a single JPEG using sensor shift.”

Of course, the most recent addition to Olympus’ OM-D family will be celebrated primarily for its remarkable titanium looks, luxurious leather accessories and the powerful sense of heritage it conveys to anyone who holds it. But in essence it remains a sophisticated tool for the spontaneous creative photographer and videographer. It is smaller and much lighter than comparable SLRs and, as such, it enables filmmakers to capture handheld movies outdoors without carrying additional, bulky equipment – blur- and noise-free – irrespective of poor light. As a tribute to his benchmark OM cameras of yesteryear, Yoshihisa Maitani would surely approve.

Register for MyOlympus at myolympus.olympus-consumer.com

• The OM-D E-M5 Mark II Limited Edition body only is priced at £999.99 RRP inc VAT and available from specialist photographic retailers from June 2015.

* TIPA 2015: ‘Best Compact System Camera Expert’
** As of May 2015. Among interchangeable lens cameras – including SLRs – on the market, and using Olympus’ in-house test conditions. Steps according to CIPA testing conditions.
*** Six months on top of the statutory warranty in the country of purchase.