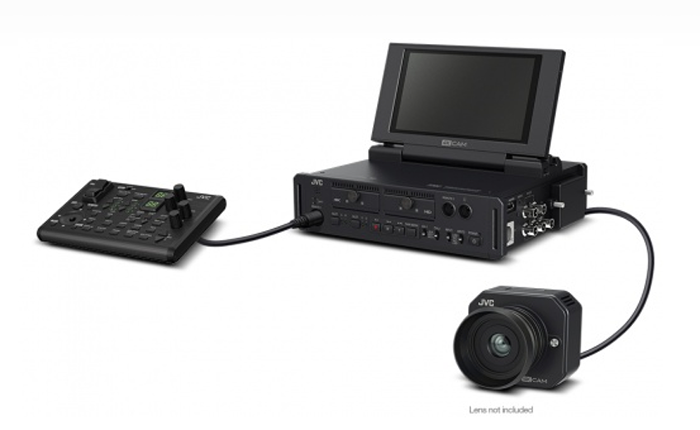 As you know JVC recently announced a “cheap” and very well specced GY-LS300 4KCAM you can get at BHphoto (Click here). But along that camera they also announced another “unusual” looking GW-SP100E remote head 4KCAM Micro Four Thirds camera system! (Source: JVC UK).

This is the full press release:

The JVC GW-SP100 is a 4KCAM remote camera head and recording unit; the system includes the camera head, a recording/playback device with built-in monitor and a RCU controller. This tiny camera produces beautiful 4K video, with 3840×2160 resolution, at up to 50/60p recorded locally to SDXC UHS-I U3 memory cards. It has an interchangeable MFT lens mount system, chosen due to its very shallow flange depth, which offers the greatest flexibility to end users who have already invested in lenses.

The GW-SP100 camera system features a video unit with a foldable and detachable 7-inch full HD LCD monitor and includes a wired dedicated remote and camera control panel. For connection between the camera head and the recording/playback device, optional longer cable lengths of 5m and 15m are also available. The camera records at 4K Ultra HD and HD at 4:2:2 150Mbps, and supports up to 50/60p recording in both HD and 4K. 4K footage is recorded as a single file in AVC H.264 format at 150Mbps. Thanks to the system’s two dual codecs and four card slots (two for 4K, two for HD), the camera can record 4K+4K and HD+HD (continuous/dual recording), making it a very flexible system. Recording is via cost-effective SDHC/SDXC cards; a single 64GB UHS-I U3 SDXC card provides around 50 minutes of recorded 4K footage at 60p.

Since the camera head is separate from the recorder, this opens up many dedicated applications for the system, including use for industrial or film applications, on special vessels/cranes/trucks, or as a high-resolution microscope camera and recording system. The mini 4K camera can also be attached to a gimbal option; this may be used with a helicopter system for aerial shooting, with anti-shaking and anti-blurring technology ideal when used with a handheld system. So, while the mini 4K camera produces images suitable for cinematic applications, the system also has applications for broadcast news and could open a whole new world for broadcasters.