Panasonic announced that they will reduce nine percent of the global workforce due to restructuring efforts. 35,000 people will loose their job. Engadget said: “The cuts will come over two years. The news comes as Panasonic reported a ¥40.7 billion ($499 million) loss for quarter, largely on account of a ¥61 billion ($748 million) restructuring cost. Panny says that its bottom line was also affected by a strong Yen, stiff competition in television sales, and the recent earthquake and tsunami.”

That’s a terrible news for all the workers and maybe for Panasonic too. If you have to cut 9% of your employees means that something isn’t working very well inside your company. A wonder what kind of influence this will have on the Digital Imaging division and the future Micro Four Thirds products strategy.

UPDATE: Photoscala published the financial results from Panasonic. The bad news is that Panasonic had a 10% turnover drop on digital camera sales. The last quarter had the worst result since two years. See the image below (Image courtesy: Photoscala) 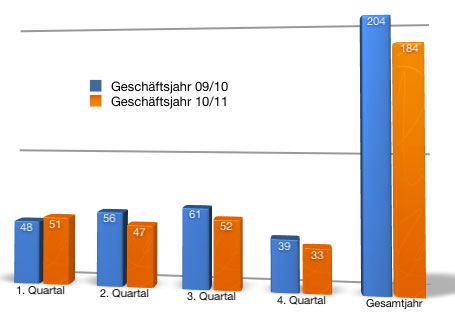 Doesn’t look good at all.