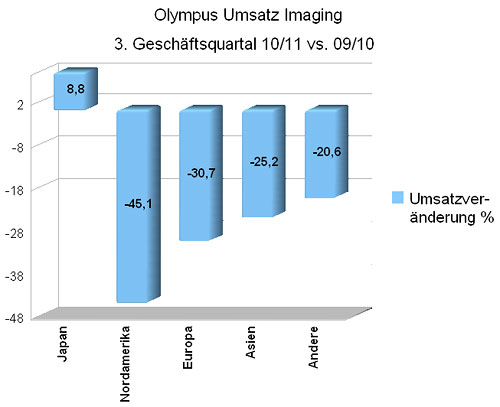 Bad news for Olympus! The Japanese company reports a turnover decline of 4.5% for the third quarter (October to December 2010). Consolidated operating profit falls by 46% to 8.9 billion yen (about € 78.7 million). Source: Financial Results for the Third Quarter ended December 31, 2010 (PDF file). And the “worst” part of the company is the Imaging Division that had a 28% sales loss compared to last year. Strong YEN and sales drop in North America are the main reasons for the bad results. The medical division of Olympus is still the strongest and most profitable business.

It sounds like Micro Four Thirds didn’t help them to increase the turnover. Some expert out there that can explain us the reason for such bad results?

But we also have a major and very unexpected news. Michael C. Woodford will become Chief Executive Officer of Olympus on 1 April 2011.  Mr. Woodford comes from the Olympus Medical & Industrial Division of Olympus. He is the first non japanese chief in Olympus history. That’s almost a “revolution” for a japanese company! Let’s hope he can bring some fresh new ideas inside Olympus. Good luck Mr. Ford!