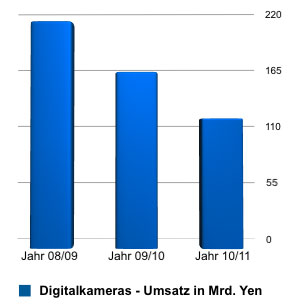 The revenue made by Olympus with the Imaging division. Graph made by Photoscala.de

One thing is sure. it’s time for Olympus to wake up and change their product and marketing strategy. The last “Consolidated Financial Results for the Fiscal Year Ended March 31, 2011″ describes a terrible situation for the Olympus Imaging division. The company as a whole is not doing bad at all with the medical division still signing a big “+” in both sales and net profit. But the Imaging division revenue of the year 2010-2011 is halved compared to two years ago (See the graph on top. Thanks Photoscala!). Photoscala made a detailed analysis of the report. Olympus did lose “only” a 5% in the Japanese market but around 30% in US, Europeans and other Asian markets!

And the biggest failure for Olympus is that they are year for year selling less cameras while the digital camera market as a whole is growing! See the next graph made by Photoscala.de:

In short, Olympus is doing very bad outside Japan. And it continually loses market share and that’s a bit surprising if you do consider the recent Micro Four Thirds success. Probably Four Thirds is indeed almost a dead system (from a sales point of view) and maybe Olympus didn’t manage to be as good as Panasonic in selling Micro Four Thirds products. But that’s just my speculation. They need to rethink their product and marketing strategy. They have a history of innovation and certainly a group of top engineers. It’s the product and marketing strategy that fails. This is a huge wake up call for Olympus!

Read the full article from photoscala in german or via google english translation.