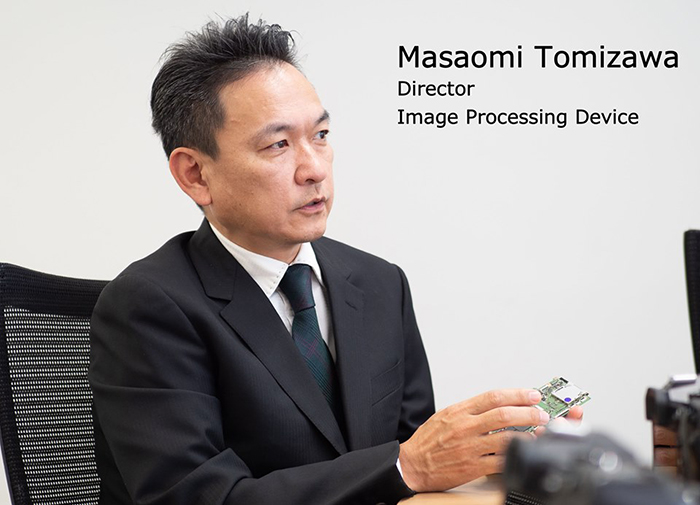 The image processing engine is an IC chip that handles all processing operations- including color conversion, noise reduction and autofocusing. The engine was not developed for a single model; instead, a single engine was designed for all cameras in the current generation. Because of the long development period, a new engine is basically required to provide at least twice the performance of its predecessor. To make this possible, we use the latest IC chip for a new engine.
However, it is not enough to create a high-performance image processing engine. What is truly important when developing an engine is the power to anticipate what will come next. It is essential to be able to conceive and visualize the camera of the future by observing current trends and then developing the technology needed to make that camera a reality.
While the algorithm development team at Olympus indicates what needs to be implemented into the next model, the engine development team looks yet one step beyond that and works to provide the engine with flexibility. This extra margin determines the destiny of the camera systems for a generation.
For example, the E-M1X, which was released in January of 2019, employs two TruePic VIII image processing engines, each of which is identical to the engine incorporated in the E-M1 Mark II. We were able to incorporate two engines into the new model because we had previously embedded in each engine a mechanism to facilitate synchronization.

With two engines, an exciting new array of capabilities have been unleashed such as Handheld High Res Shot. Technically, the new Handheld High Res Shot’s framework is completely different from the previous Tripod High Res Shot. Nevertheless, this does not mean that the TruePic VIII actually incorporates the functionality for the Handheld High Res Shot function. All we did was to predict the kind of processing that would be required by analyzing trends and incorporating the parts required in advance. We later succeeded in implementing the Handheld High Res Shot with the E-M1X by combining those parts.
We are confident in our ability to anticipate the future. As the leader in mirrorless cameras, we were the first to launch development of a dedicated engine, the first to get feedback from our customers, and the first to translate that feedback into hardware.
One of our other strong points is that we send our engine developers out in the field with professional photographers. This gives our engineers a chance to observe professionals in action, to see how they use their equipment, what they need, what they like, and what will help them to achieve their shooting objectives. This data forms the basis for conceptualizing the next-gen engine, which will appear on the scene in a few years.