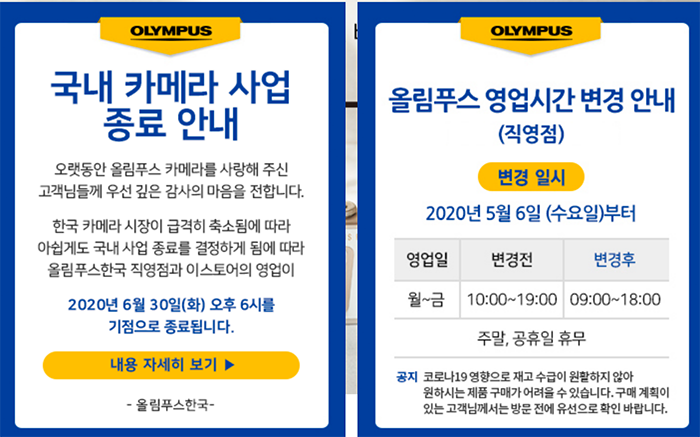 This is a surprising news! And the reason behind it is speculated to be an ongoing anti-Japan sentiment and voluntary boycott movement against all Japanese products in South Korea.

Olympus plans to exit its camera business in South Korea hit by decreasing sales, focusing instead on optical equipment for medical purposes and scientific equipment, the Korean branch of the Japanese manufacturer said Thursday.

In a statement, Olympus Korea said it will “cease its imaging business in Korea, effective June 30, 2020.” Its Brand Store, a store operated by Olympus Korea in southern Seoul, and its online shopping mall E-store will also be closed on the same day.

The company, however, added it will keep operating the service division until March 31, 2026. The division is responsible for repairing and exchanging Olympus products.

The Korean unit said the decision was mostly because of declining sales volume.

“Olympus Korea had made strenuous efforts to increase the profitability and efficiency of its imaging business by concentrating on mirrorless cameras, including OM-Dand PEN as well as interchangeable lenses. However, over the last few years, the market has sharply declined. As a result, it has become barely possible to sustain the business with profit, leading to the decision to withdraw the imaging business from the market,” the company said.

The company is moving its focus to providing diagnostic and therapeutic products for the medical business including medical endoscopes, laparoscopes and surgical devices. It also sells an integrated operating room system, which provides a touch-screen and voice-control system that allows surgeons to manage a range of medical devices more conveniently.

Regarding whether the company’s move is in response to ongoing anti-Japan sentiment and voluntary boycott movement against all Japanese products in South Korea, an Olympus Korea official denied such speculation. Last year Japan removed South Korea from its list of preferred trading partners.

“Olympus Korea decided to wind out our camera business here on the background that the volume of the digital camera market is dwindling and the sales of our camera products are also decreasing,” the official said.

Koreans began the voluntary move to boycott goods and service made by Japanese makers when Tokyo announced it would start to impose tougher restrictions on exports of materials used for semiconductors and displays last July in reaction to Seoul’s top court ruling in October 2018 that ordered Nippon Steel to compensate surviving South Korean victims of wartime forced labor.

Very bad news. I hope this will nt happen in other countries too!