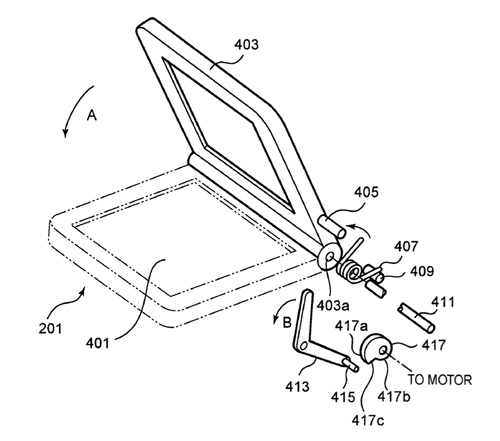 A half year ago a source sent us a rumor about a Olympus prototype camera that sues a semi-transparent mirror (What Sony calls Translucent). Good to know that the rumor was correct because today we found the patent that explains how it works! Download the pdf at http://www.freepatentsonline.com/7889268.pdf. The many difference between the Sony solution and the Olympus patent is that you can flip up the mirror when you want to avoid the light loss you have using the semi transparent mirror.

And that was the description of the prototype the source has seen:

But there is also a second FourThirds prototype that he is testing. The name is E-P330 (again a FAKE name). It is be very similar to the current E-330

. It has a similar technology to the Sony A33/55, but it does not have a translucent mirror, it has some kind of liquid chrystal mirror. The advantage is that you have no light loss when you take the real picture. The mirror can electronically change between 50% translucent and 100%. When you don’t take pictures it uses 50% of the light for the AF-system and 50% for the sensor. When you take the picture it uses the full 100% alight source. The disadvantage is that it is not as fast as the Sony technology and you do not have any AF if the mirror is at 100%. The prototype iuses the same E-620

AF-system. The viewfinder is integrated in the body and has the same specs as the VF2

for MicroFourThirds. The LCD can be tilted and it uses the same [14826]GH1[/shoplink] sensor. It takes movies with 720p. You can use an external microphone.

UPDATED: I corrected the typos. Sorry I was in real hurry today and as usual writing article with the iPhone isn’t really helping. + I am sick today :(