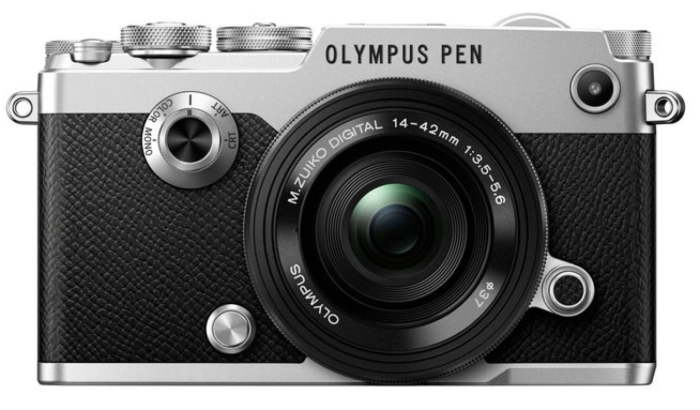 CENTER VALLEY, Pa., January 27, 2016 Olympus is pleased to announce the PEN-F, a compact system camera created by fusing cutting-edge digital technology with craftsmanship handed down from 80 years of Olympus camera manufacturing. As the digital update of the original PEN-F, the world s first half-frame SLR, the new PEN-F is packed with incredible performance advancements for photographers seeking superior image quality and creative control. The 20 megapixel Live MOS Sensor is combined with Olympus 5-Axis Image Stabilization, a built-in 2.36 million-dot OLED electronic viewfinder, and a new Creative Dial on the front of the camera that accesses a host of controls to deliver a captivating shooting experience, all included in a design that exudes timeless beauty.

The PEN-F s classic body lines and silhouette are inherited from its predecessor, which debuted in 1963. The top and front covers of the body are crafted from magnesium, and the precision metal dials (along with the bottom of the body) are crafted from aluminum. Olympus engineers devoted extraordinary resources to ensure superior quality and craftsmanship, so much so that even screws are undetectable on the camera s exterior. Simple, stylish touches like the included camera strap and the leather-grained exterior of the camera body and the back of the articulating LCD monitor provide a unified look and feel. Customizable buttons and dials are positioned for easy operation while the user looks through the viewfinder, and the new Exposure Compensation dial and four custom modes on the Mode Dial offer instant access to registered settings for simple, direct control.

Ultimate Image Quality in Every Situation

The PEN-F s new Monochrome and Color Profile Control functions allow photographers the ability to emulate their favorite films of years past. These functions differ from using photo editing software after shooting, as they allow users to apply and check effects in Live View while shooting to create their own original images. Both functions include quick-select presets designed to give images the look of classic film. Or, settings can be completely customized to achieve specific looks. The camera s frontmounted Creative Dial accesses Monochrome Profile Control, Color Profile Control, Art Filters, and Color Creator, all with a simple twist.

In Color Profile Control, users are able to adjust the color saturation of 12 individual colors in 11 steps. This is combined with Highlight and Shadow Control for limitless color expression. In addition to the default setting (Preset 1), there is also Chrome Film Rich Color (Preset 2), which provides deeper tones in images, and Chrome Film Vivid Saturation (Preset 3), which creates high levels of color saturation. The PEN-F s rear lever lets users easily toggle through the various effect controls, including Highlight and Shadow Control, a feature that also allows for the adjustment of midtones within plus or minus seven steps for advanced customization.

The PEN-F is equipped with a built-in 2.36 million-dot high resolution OLED Electronic Viewfinder (EVF) with a 100-percent field of view and a magnification rate of 1.23x (35mm equivalent: approx. 0.62x) for a clear view without aberrations, even at the edges. Simulated OVF (S-OVF) Mode expands the dynamic range and provides an image similar to what would be seen with the naked eye. The magnified display function and Focus Peaking (which offers three levels and four colors) allow for extremely precise lens focusing. In addition, the PEN-F s vari-angle, touch-enabled LCD monitor lets users compose Live View shots from a variety wof angles, high or low.

The PEN-F features blazing-fast speed with the shortest shutter-release time lag of any compact system camera** at 0.044 seconds. The 1/8000-second, high-speed mechanical shutter provides superior performance for capturing fast action, and shutter functions can be customized according to the scene. Silent Mode is useful for shooting in situations that require complete silence, and Anti-Shock Mode allows users to prevent shutter shake. The AF Targeting Pad enhances control by allowing users to set focus points by touching the rear monitor with their thumb while composing their shot in the viewfinder. Face Priority AF and Eye Priority AF detect and continuously adjust the focus on faces or eyes for easier portrait shooting. Enhancing the detail of every shot is AF Target Spot Metering, which links the AF Target and the metering area, while Super Spot AF and Small Target AF make it possible to focus on small subjects.

The PEN-F offers additional compatibility with users legacy lenses by enabling them to register the information of lenses without electronic contacts for inclusion in images EXIF data. The lens information may be recalled with the press of a button. Up to 10 lenses can be registered, including the lens name, focal length and aperture value.

Other creative features include Live Composite Modewhich allows users to extract and composite the brightest areas from multiple, sequentially shot images to capture incredible cityscapes and star trails. With the PEN-F s built-in Wi-Fi@reg;, users can utilize the Olympus Image Share app for Android@reg; and Apple@reg; to adjust settings and monitor the progress of the image as it develops in real time on a smartphone or tablet. In 4K Time Lapse Movie, the camera captures up to 999 images automatically at intervals ranging from one image every second to one image every 24 hours, and combines them into a stunning high-resolution 4K video, all in-camera, without the need for additional software.

For those who enjoy macro photography, Focus Bracketing captures multiple shots at the touch of a button, all with slightly different focus depths. The new Live View Boost 2 makes it possible to easily focus and compose shots while checking visible stars in Live View. The PEN-F s high-speed sequential shooting capabilities let users capture all the action at 10 fps with the mechanical shutter, 5 fps with C-AF, and an extraordinary 20 fps with Silent Mode.

Optional accessories include the External Metal Grip (ECG-4) that lets users replace the battery without removing the grip, featuring a Quick Shoe Compatible Rail on the bottom for direct connection to a compatible tripod head. Premium-quality leather accessories are also available in limited quantities. The Premium Leather Shoulder Strap (CSS-S120L PR) features high-quality leather with a two-tone design and a thickness that helps reduce shoulder strain. A Premium Leather Wrapping Cloth (CS-48 PR) made of finely textured genuine leather is perfect for wrapping the entire camera with a large lens attached. The Premium Leather Camera Bag (CBG-11 PR) is a compact, genuine leather camera bag produced under the direction of AJIOKA Co., Ltd., a Japanese leather manufacturer, with thorough attention to details including pockets, a shoulder pad, and shoulder strap. The Genuine Leather Body Jacket (CS-47B) is designed to protect the bottom of the Olympus PEN-F from bumps and scratches.

To find out more about the Olympus PEN-F and for a complete list of specifications, visit the Olympus website at http://www.getolympus.com/us/en/digitalcameras/pen/penf.html.