There are many factors that go into choosing a new camera – chief among them user friendliness and performance. But there is also something to be said for aesthetic elements such as good design and the use of color in making a choice.

At Olympus, our Design Centre is in charge of product design. The design of our new OLYMPUS PEN , an interchangeable lens system digital camera, is one more result of their efforts. Olympus Pursuit went to talk with Yasuo Funakoshi, the man who was in charge of designing the OLYMPUS PEN E-P1. 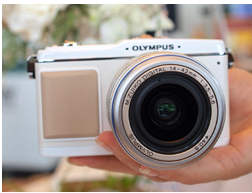 OLYMPUS PEN E-P1
PURSUIT: So, I hear you’ve always thought about how great it would be if the PEN went digital.

Funakoshi: Back when I was in elementary school, the first camera I ever used was a PEN. I still can’t forget how happy I was at that moment and how the camera’s cold metal felt when I took it in my hands. I thought I’d love to create a camera like that if I ever had the chance.

As you know, the PEN is a high-profile camera that sparked the half-frame size boom and has sold over 17 million units. So, I thought that I could grab the attention of a host of camera lovers if I could go a step further and give them a digital SLR camera that was even smaller. 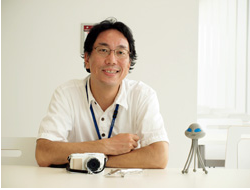 Neptan interviews Mr. Funakoshi, the OLYMPUS PEN E-P1 designer
I wanted the countless Olympus fans out there to roar with delight at how the new camera felt in their hands and how the sensation when pressing the shutter button was just like the PEN they fondly remembered. I really wanted to stick faithfully to my design all the way, so that they would have something to get excited about beyond the product’s price.

PURSUIT: What were you particularly picky about in terms of design?

Funakoshi: I really focused on the mode dial. I gave it a slightly recessed placement in the body, but in doing so, I think it makes it look like it’s made out of a solid piece of metal, rather than a single sheet that was cut into a round shape. 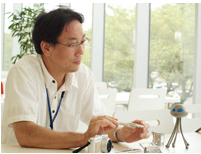 Needless to say, this sort of detailed craftsmanship is difficult and takes a lot of time. But our manufacturing division responded to my demand, “Make it look good without any compromises!”

The user friendliness of the mode dial has also dramatically improved. You might feel that the dial would be easier to turn if it were made to protrude a bit more, but when you actually try it, it’s by no means difficult to turn with a finger. And you won’t find that the mode has accidently changed while carrying it in a bag. I think we’ve come up with a design that at first glance seems to put aesthetics first, but actually is user friendly. 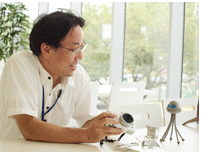 “I can’t believe how cool it looks every time I see it.”

PURSUIT: How did you feel now that you see how the E-P1 turned out?
Funakoshi: I can’t believe how cool it looks every time I see it. I was in charge of the design, but it takes more than a designer to make a camera. Our development and manufacturing divisions really did a great job. I really do appreciate the high level of perfection they achieved.

I truly hope people that think digital SLR cameras are too big give the E-P1 a try. I was shooting for a camera that would give users a little joy during their day, simply by having it there in their bag. I want them to carry it around and enjoy it everyday.