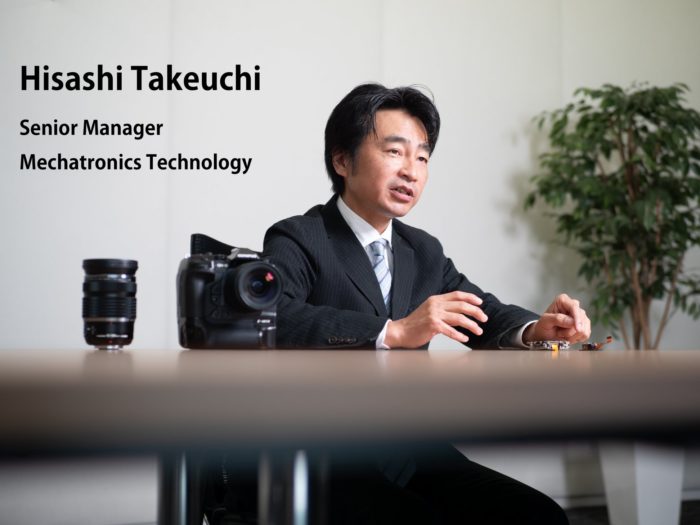 Here is the nterview with Hisashi Takeuchi, Mechatronics Technology, Senior Manager at Olympus. This interview was conducted at the OM-D E-M1X touch and try event in Tokyo:

When combined with the M.Zuiko Digital ED 12-100m f/4.0 IS PRO lens, the E-M1X can provide image stabilization performance of 7.5 steps, which – as of the beginning of 2019 – is the highest level in the world. According to our own in-house performance evaluation, this system can maintain a stable image was stable even at a shutter speed of 4 seconds and using a focal length of 40mm (equivalent to 80mm on a 35mm camera).
This is an improvement of 1 step over the stabilization effect provided by the combination of the same lens with the E-M1 Mark II. Among the factors making this possible are the development of a new gyro sensor and the design of several algorithms to maximize stabilization performance.
We have long been a leader in image stabilization technology, but in order to take that cutting edge performance to the next level we needed to develop a gyro with performance equivalent to an optical fiber gyro. Optical fiber gyros are so precise that they are used in aircraft and launch vehicles. They are also big and expensive. Our goal was to implement that kind of performance in a small sensor comparable in size to our previous models. This was no easy task, but finally, after three years of joint development with a parts manufacturer, we succeeded.
The new sensor isn’t just a step up to a new level of performance, it enters a whole new dimension. So powerful was this new gyro, that we found it nearly impossible to update our algorithms to take advantage of its performance. To succeed, we had to go through a long process of trials and errors.

The new gyro sensor isn’t just a step up to a new level of performance, it enters a whole new dimension. So powerful was this new gyro, that we found it nearly impossible to update our algorithms to take advantage of its performance. To succeed, we had to go through a long process of trials and errors.
The first problem we encountered was the impossibility of accurate evaluation. As the gyro sensor cannot be accurately evaluated in a building with a quake-absorbing structure, we had to build a lab specifically for this purpose. However, even when we executed measurements in accordance with the optimum evaluation technique, our results still varied with every measurement. Eventually we realized that accurate measurement was not possible at the current level of technology and that we would need dedicated equipment and a more difficult environment in order to properly evaluate this new gyro sensor.
There was also a surprise in the camera manufacturing process. Assembly of the image stabilizer has always been an extremely difficult process that imposed a burden on the operator. We found that some cameras were unable to manifest the expected performance even when they were precisely assembled by skilled operators. What this meant was that the gyro sensor performance and the target image stabilization performance were so vastly improved that issues previously regarded to be inconsequential suddenly loomed large. To deal with the emergence of these new problems, we had to revamp the manufacturing process itself.
Ultimately, our goal is to eliminate the need for a tripod altogether and make it possible for photographers to enjoy handheld shooting in any scene under any conditions.