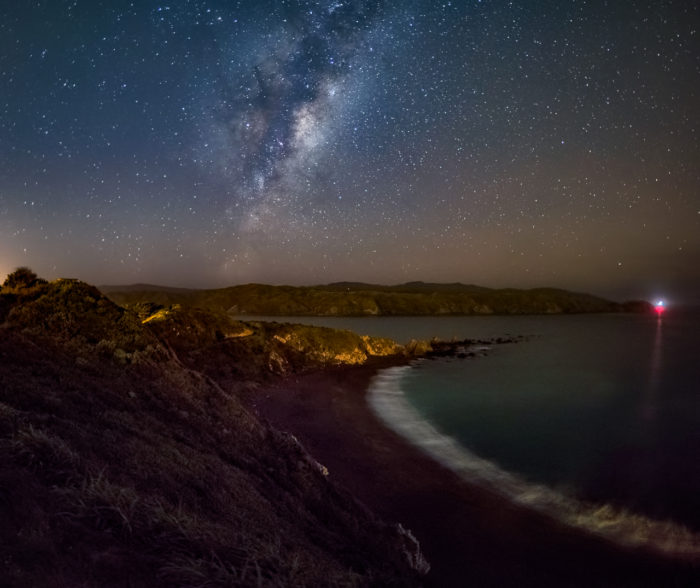 This is a Guest Post from Jonathan Usher (text and image credit: facebook.com/JonathanUsherPhotography):

A few days ago I was lucky enough for PetaPixel to do a feature on an image of mine – a handheld shot of the Milky Way from a single 10 second exposure with my Olympus OM-D E-M1 MkII micro 4/3 camera (see petapixel.com for that story).

I wondered how I could potentially improve on the quality of such an image – but still keep the camera (with Olympus 8mm f/1.8 fisheye lens) handheld, not leaning on anything for support.

Here’s what I figured.  If I could keep the image sharp(ish) at 10 seconds exposure some of the time, surely I could keep the image sharp at just 5 seconds exposure almost all of the time.  And, if I took (say) 10 such exposures, one after the other, I could stack them to improve the signal to noise ratio, even if I had to bump the ISO to say 3200 given each was only a 5 second exposure.

Well, it worked (all 10 exposures were sharp)!  I took my E-M1 MkII camera out on a rather calm evening this week, above Breaker Bay in Wellington, New Zealand, and caught the arc of the bay and the sweep of the star lanes in this image – handheld – that still manages to capture the wonderful hues of the water in Breaker Bay.  This is a stack of 10 5-second images, each with the Olympus 8mm f/1.8 fisheye lens at f/1.8, ISO 3200.  And when you stack 10 images, the noise in the final image is reduced very significantly compared with a single image…

I plan to print the resulting image 16″x20″ to see what the print quality is like.  I think it should be pretty nice.  <Update: I’ve done the print now and while it may not be the sharpest/cleanest night image I’ve ever done, it’s much better than I would have expected and perfectly workable.>.

I hope you enjoy this image from my experimentation!  Sure, for most night imaging I’ll still use a tripod – but it’s nice to know I still have very workable options should I be out with the camera and without the tripod :) 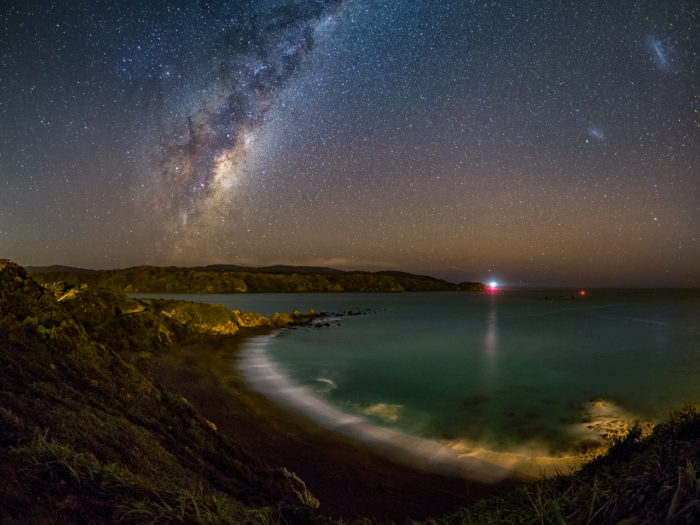 I’m finding my Olympus OM-D E-M1 MkII to be a surprisingly good camera for nightscapes, with the appropriate lenses of course.  Here’s an example from above Breaker Bay the other night.  This one, unlike some of my other recent posts, was not taken handheld.  Rather it’s a “stack” of 10 or so individual images (each ISO 1600 for 20 seconds; Olympus 8mm f/1.8 fisheye at f/2).  Stacking images does take longer in terms of processing but the lower noise in the final image makes it worthwhile!