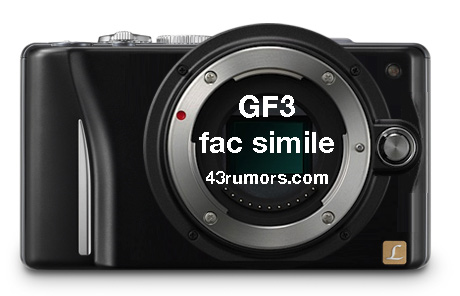 A GF3 fac simile. Not the real camera!

In mid June Panasonic will announce the new GF3 which will be an ultra small camera that will replace the current Panasonic GF2. That’s a huge surprise if you do consider the GF2 is only eight months old! But it’s also not a surprise if you see the success of Sony’s NEX cameras which are as small as the current GF2 but do use a larger APS-C sensor. And the upcoming Sony NEX-C3 will be even smaller (Click here to see the NEX-C3 versus GF2 size comparison). So after the Megapixel and the High-ISO war Sony and Panasonic started a new kind of competition….the miniaturization battle!

To compete against the upcoming NEX-C3 the new Panasonic GF3 will be around 10-15% less high, less wide, less thick than the current GF2. I have been told it has about the same size of the current Panasonic TZ cameras (Click here to see them on eBay). De facto the mount ring is higher than the camera itself! And to make it that small Panasonic removed some of the GF2 buttons and also the hot shoe is no more present! Some of my sources told us that this is the first camera that easily fits in any pocket when the 14mm pancake is attached. It feels like a real compact camera! A new source told us the GF3 has the same G3 sensor and specs (and that’s good news!). That means it has the new 16 Megapixel sensor FullHD recording.

And here is what Steve Jobs would call the …one more thing surprise:

The fact that the GF is going to be smaller and smaller doesn’t mean that we don’t want to see a GF model with more advanced manual controls. Three sources confirmed that we should expect a second GF model to be announced within the second half of the year. It’s aimed for semi-pro photographers. That’s all I know for now, but it’s enough to make me dream the Micro Four Thirds L1 might be coming for real (Click here to see that amazing camera on eBay)!

I am constantly working to provide you with FT5 rumors about Olympus and Panasonic. Lots of stuff is coming! Stay tuned! Don’t miss any rumors: Join us on Facebook and Twitter! Subscribe our RSS feed!