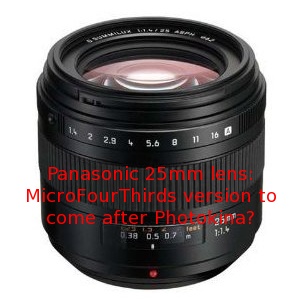 The following rumor comes from two very good sources! They told us that Panasonic will launch new prime lenses in Q4 of this year (after Photokina) and Q1 of 2011. One of those lenses will certainly be the MicroFourThirds version of the current

But there will be a difference…one of our source told us that Panasonic will make that lens even faster! Not by much but Panasonic has understood that fast primes are what people is looking for. I expect Panasonic to release a new lens roadmap at Photokina (September). But we hope to give you more details about the 25mm and other prme lenses before September! :)
Months ago we asked what prime lenses are the most needed by our readers. That was the result:
– 25mm (982 votes)
– 12mm (823 votes)
– 17mm (475 votes)
– 14mm (373 votes)