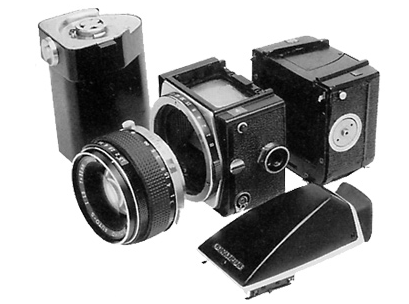 I still have no confirmation from top sources so please don’t get too serious about that until I havent’ got more info. Anyway, the french magazine 01net.com reports that Olympus will launch a “professional hybrid” (which mean mirrorless) at Photokina and with availability in 2013 (found the news via Lepidi).

Olympus already stated many times that for them a professional camera is a camera that has the advantages of both, Micro Four Thirds and Four Thirds technologies. An example of what Olympus could do is an OM camera with a special mirror adapter like the [shoplink 31778 ebay]Leica Visoflex (here on eBay)[/shoplink]. Back in December Mr. Ogama from Olympus  hinted about their future key technologies by saying: “All I can say is, when you look through the viewfinder, you’ll understand….“. Source: Impressjapan (Click here to download the pdf of the magazine).

At that point I am asking my sources to confirm the rumor I got from unknown sources. Will there really “something PRO” at Photokina? Cross your fingers 43rumors readers :)