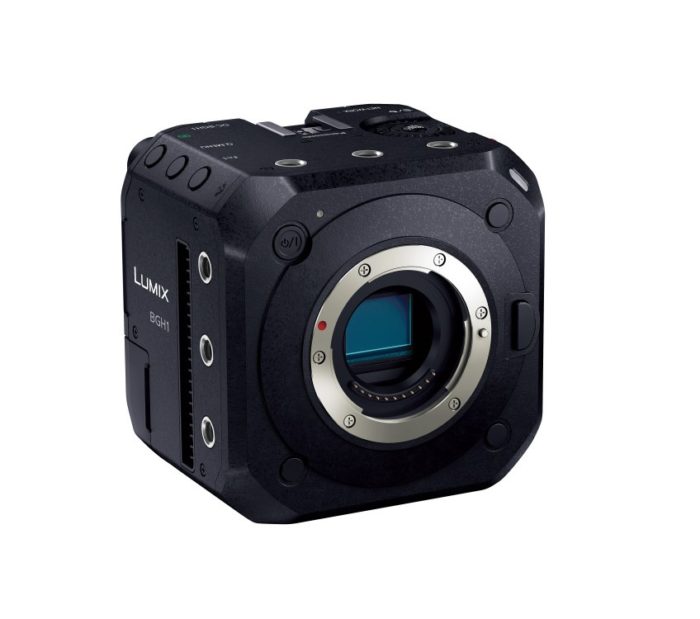 this thing is really damn small!

Customizability that flexibly responds to the needs of professional video production sites, from multi-cameras to conventional shooting styles

LUMIX’s first innovative box-style body is packed with the advanced video performance cultivated in the LUMIX GH series. By laying out a highly expandable interface for professional use on the body in order to support multi-camera shooting, which is becoming a trend, we support a wide range of professional video production sites in all directions. By linking with monitors, recorders, microphones, rigs, tripods, gimbals, drones, operating equipment, etc. made by other companies, we provide a high degree of customization according to user needs. We can handle a wide range of tasks, from compact one-man shooting to team-based shooting sites that require the operation of multiple units.

Excellent video performance that inherits the genealogy of the GH series

60p 10bit recording is realized in Cinema4K (4096 x 2160) mode. Even for fast-moving subjects, you can shoot natural and smooth images while suppressing the rolling shutter distortion phenomenon, and you can record high-definition and realistic videos. 10-bit recording, which has 64 times the amount of information as 8-bit recording, provides gradation and subtle nuances of gradation, increasing the degree of freedom in editing and grading. It has twice the color information and 128 times the amount of information as a whole compared to 8-bit recording. 4: 2: 2 10-bit recording can be internally recorded on an SD card, and ALL-Intra recording is also supported. High bit rate recording up to 400 Mbps supports advanced non-linear editing. The HDMI output can output 4: 2: 2 10bit 4K 60p video, and can record high quality 4K video to an external recorder. It also has a full range of video recording modes for professional video production sites, such as 4K anamorphic video recording that supports 4: 3 aspect anamorphic lenses.

The heat dissipation structure equipped with a high-precision heat dissipation simulation and heat dissipation fan has realized unlimited recording time within the guaranteed operating temperature in all video recording modes. By enabling long-time shooting, we can meet the trust of a wide range of professional shooting sites, such as uncut shooting for over 30 minutes and documentary shooting.

This unit has a wide dynamic range of 13 stops with excellent highlight resistance. It draws finely from the dark part to the highlight part, enabling highly flexible color grading in video production editing. When shooting V-Log L, you can check the look at the finish with the V-Log view assist function that displays the image after applying the LUT on an external monitor. Also, in post-production, you can create consistent pictures by combining with the LUMIX G series that supports V-Log L, the Panasonic cinema camera VariCam that supports V-Log, and the movies shot with the full-size single-lens camera LUMIX S series. You can edit the video of.

It is cinema-like and impressive by utilizing the cinema-like gamma that reproduces the look that reflects the painting concept of Panasonic’s cinema camera VariCam and S1H without log shooting or color grading in post production. You will be able to make pictures. You can select “Cine-like D2” that prioritizes dynamic range and “Cine-like V 2” that emphasizes contrast from photo styles.

Real-time recognition AF with enhanced AF tracking performance for humans is installed by adding “head recognition” of the human body to the automatic recognition algorithm that applies deep learning, which is an advanced technology in the AI ​​field. Even in a moving subject or a scene where the face of a person is hidden, the camera automatically determines the shooting intention based on the position, size, and angle of view of the head and human body, and keeps focusing while suppressing background omission. “Face / Eye Recognition AF”, which detects a person’s face and eyes and automatically focuses on them, and “Head Recognition” make it possible to continue recognizing even small faces in the distance. The combination of enhanced “Human Body Recognition AF” and “Face / Eye Recognition AF” realizes more accurate AF tracking for people. It is also equipped with “Animal Recognition AF”, so it demonstrates high focus performance for animals.

You can control the camera from your computer by connecting this unit to your computer using a hub and LAN cable. You can check the live view on your computer screen by installing the dedicated software “LUMIX Tether for Multicam” that will be released when this unit is released. You can also change settings such as the specified camera aperture, shutter speed, ISO sensitivity, and white balance, allowing you to make detailed settings smoothly when shooting with multiple cameras. It is also possible to perform the same control via a USB cable.

via Nokishita via Personal view