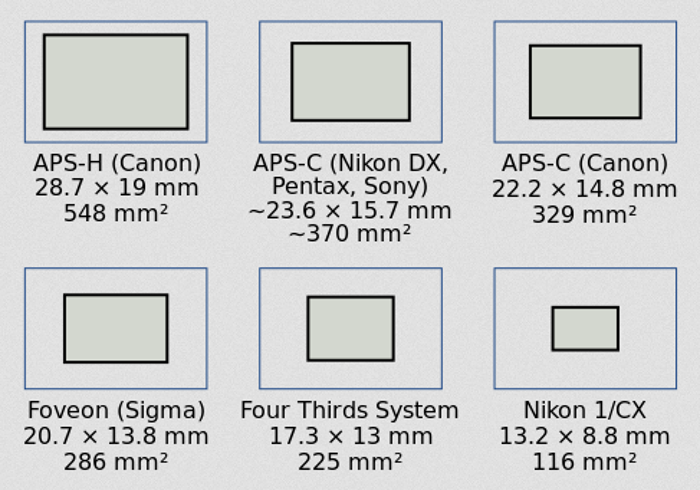 On 43rumors plenty of commenters keep saying that there is a “4 times factor” difference between Full Frame and Micro Four Thirds. For those people a f/2.8 PRO zoom from Olympus actually has an “equivalent” Full Frame aperture of f/5.6. Now, while I agree that this is in a very abstract theory correct… it is actually absurd and wrong if you look at the full aspects of the camera technology.

And without me having to explain you why it is so just read the super well written “”Sensor Crop Factors and Equivalence” article written by from Nasim Mansurov on Photographylife. Particlualry point 8) Total Light explains you why that “virtual equivalence” made by so many bloggers and commenters is de facto nonsense:

8) Total Light
“Equivalence” created another ugly child: total light. This theory, which is brought up by some photographers, says that smaller sensors get less total light than larger sensors just because they are physically smaller. That’s how they explain that small sensors have worse noise performance / overall image quality. That a full-frame sensor looks cleaner at higher ISOs than say Micro Four Thirds, just because its sensor area is four times larger. I don’t know where these theories originate from, but I fond the idea of “Total Light” and its relevance to ISO absurd. Explaining why sensor of one size has a cleaner output when compared to a smaller sensor just because it is physically larger has one major flaw – it is actually not true once you factor in a couple of variables: sensor technology, image processing pipeline and sensor generation. If larger sensors did receive more “total light” than smaller sensors, then every full-frame sensor made to date would beat every APS-C sensor, including the latest and greatest. Consequently, every medium format sensor would beat every full-frame sensor made to date. Is that true? Absolutely not. Just compare the output of the first generation Canon 1DS full-frame camera at ISO 800 to a modern Sony APS-C sensor – have a peek at this review from Luminous Landscape and have fun comparing. Surprised to see APS-C beat full-frame? No, not really. Newer sensor technologies, better image processing pipelines and other factors make modern sensors shine when compared to old ones. Simply put, newer is better when it comes to sensor technology. APS-C has come far along in terms of noise performance, easily beating first generation full-frame sensors in terms of colors, dynamic range and high ISO performance. CMOS is cleaner than old generation CCD that struggled even at ISO 400! Until recently, medium format cameras used to be terrible at high ISOs due to use of CCD sensors (which have other strengths). But if we look at the theory of “total light”, medium format sensors are supposed to be much better than full-frame just because their sensor sizes are bigger. But if we look at high ISO performance and dynamic range, it turns out that it is actually not the case. So these folks now add a few words / disclaimers at the end of their statements like “as long as the sensors are of equal efficiency and generation”. When we talk about aperture or shutter speed, there is no such thing as a new generation aperture and shutter speed, and yet they think they can slap on those words for sensor performance. Don’t be fooled by such statements, as they make no sense. The theory of “total light” is too darn confusing, so it is not worth wasting time on.

Thanks Nasim Mansurov for bringing down that discussion to a very “practical – reasonable” level :)