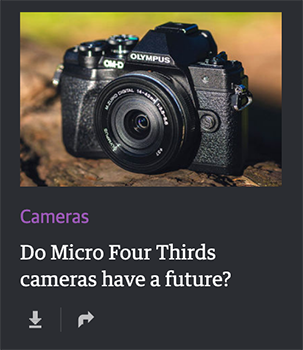 I was a bit surprised today to find this MFT related article on Engadget. They ararely talk about cameras anymore. But it seems theynow had a lot of interest to check what’s the future of MFT. And accordin to their report MFT has a miriade of very ood reasons to stay in this market. Here are a couple of statements:

– What is the purpose of having 40 million pixels if your means of reproduction is 2,000 across?

– David Thorpe says he is happy with the depth of field trade-off because it allows him to carry lenses that are smaller and lighter than most glass designed for full-frame mirrorless cameras. And should the need arise, he would skip full-frame entirely and shoot with a medium-format sensor.

– You can hold it for long periods of time and therefore capture more decisive moments. Unlike a bulky DSLR, it’s fairly inconspicuous and shoots silently. And because it has a small footprint, you’re more likely to carry it and capture interesting photographs. As the age-old saying goes, the best camera is the one you have with you. And for MFT users, the default doesn’t have to be a smartphone.

– “Bigger formats, bigger sensors, the things you can use at the studio, this is not in line with our philosophy,” Murata said.

– Olympus also has limited resources. It could develop two systems, but that would mean splitting time and money. Instead, it wants to build the perfect system for people who already own an MFT camera or appreciate its sleek, minimalist approach to photography. “Maybe not for everybody, but for our users that value the small and lightweight,” he said. “We still believe this is one of the best solutions for most of the photographers in the market.”