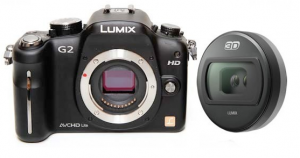 We “predicted” it on 43rumors and now it is here! The new 3D lens for MicroFourThirds

cameras. The lens will be on sale by late 2010 and also the image of the lens is just a prototyp. But also other 3D stuff has been announced:

Having already taken the lead in 3D technology, Panasonic has had great success with the launch of their 3D-capable VIERA televisions and 3D Blu-rayTM Disc Players. The 3D market is predicted to steadily grow over the coming years, as explained by industry analysts, Screen Digest: “As consumers slowly replace the main TV set in their house, and as the price of 3D TVs continue to fall, Screen Digest expects that 3D TVs will be in around a quarter of households in major developed markets by the end of 2014***. “

The introduction of the 3D lens aims to respond to demands of consumers who want to enjoy 3D shooting for themselves whilst also expanding Panasonic’s range of 3D products. The lens will allow users to capture images in 3D which can then be viewed back using 3D-capable VIERA televisions in the comfort of their own home.

“As consumers slowly replace the main TV set in their house, and as the price of 3D TVs continue to fall, Screen Digest expects that 3D TVs will be in around a quarter of households in major developed markets by the end of 2014. “

Until now, 3D shooting with an interchangeable lens system camera has only been possible by using panorama systems or a combination of two lenses and two CCDs, but these systems have drawbacks including the need for a dedicated 3D camera and the difficulties of capturing moving objects. Panasonic’s new 3D lens for the LUMIX G Micro System features two optical systems installed within the diameter of the lens mount, creating stereo images from the left and right lenses, to be processed with a 3D image processing system. Thanks to Panasonic’s advancements in optical technology, image processing system, and lens barrel design, the 3D lens still manages to retain an extremely compact size.

Through expanding its range of 3D products, Panasonic will continue to lead the industry by bringing a true-to-life 3D experience to its customers. 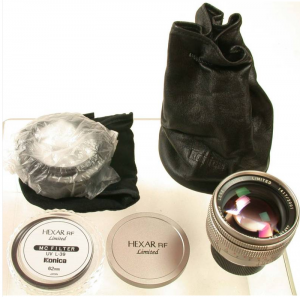 If you are looking for a very high-quality and very fast lens (and you have a lot of money to spend) than you should take a close look on the Konica 50mm f/1.2 lens

! I found some image samples of the lens used on a Panasonic G1 here: yotarouyokosuka.com Image samples on Leica cameras are available here on < a href="http://plaza.rakuten.co.jp/utsurundesu/20015" target="_blank">Rakuten and Stephen Lee
A small review is available here: portretteur.nl. He also made a comparison with the Canon FD 50mm f/1.2

And if you want to get the lens or just check price and availability click here to see the lens on eBay: Konica 50mm f/1.2 lens

We are now only two months from Photokina and I expect and increase of rumors and news. I can’t watch all forums and websites alone. That’s why I ask you for a little help! If you find some interesting news and rumors feel free to share it on 43rumors!

How to share rumors and news:
Every little piece of rumor helps us to get closer to the real “picture”. You can keep yourself anonymous by sending us a message using the contact form on the right sidebar. Avoid giving me your name and email adress. Just send me the message. You can also contact us on 43rumors@gmail.com. Only myself will read those emails. I suggest you to create some kind of fake email account so that I can answer you back! Please don’t expect me to post your rumors before I have checked it with other sources. If I would post every rumor I do receive everyone here would get confused :)

Some tips on how to send anonymous messages and images comes form our friend from Nikonrumors:

(just replace [at] with @ and [dot] with .) by using one of those free services:

Anonymous image hosting (upload an image and just email me the link):

By the way, I don’t know if I will be at Photokina. I need a new surgery because of the broken ligament :(

Thanks all! We will certainly have some exciting time on 43rumors ;) 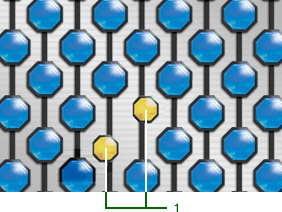 As you all now fast autofocus is one of the main advantage of classic DSLR cameras. This because a phase detection focus usually works faster than contrast autofocus. But with the release of the F300EXR

Fuji just introduced a new tecnology called Hybrid AF that will interest many of our MicroFourThirds readers! Fuji found a way to implement phase detection directly on the sensor!

You can find more information on Fujifilms website: http://www.fujifilm.com/products/digital_cameras/f/finepix_f300exr/features/

“Hybrid Auto Focus System NEW!
One of the disadvantages of longer zoom compacts is relatively slow auto focusing. Typical compacts rely on Contrast Detection, which works by fixing the focus by searching for contrast differentials.  Some expensive cameras, including many DSLRs, use two focusing systems in tandem to improve the time taken to auto focus. Phase Detection AF works by dividing the incoming light into pairs of images and calculating the phase difference to find if the object is in front focus or back focus position. Contrast AF is generally better in low-lit scenes, while Phase Detection AF is extremely responsive in good light.  Having both systems on one camera is perfect. The FinePix F300EXR uses both Contrast AF and Phase Detection AF to offer auto focus speeds as good as, or sometimes better than expensive DSLRs.  To achieve the incredible AF speed of 0.158*1 seconds, Fujifilm engineers placed pairs of phase detection sensors on the EXR sensor, which work exactly like external sensors on DSLRs.  The FinePix F300EXR automatically selects the optimum focus system, by measuring the amount of light or contrast in the scene. The benefit for the photographer is immediate and obvious: an almost instantaneous capture of the subject in the viewfinder, with no missed shots or subjects half out-of-frame.”

Hurry up Panasonic! There is way to catch up the DSLR autofocus speed! :) 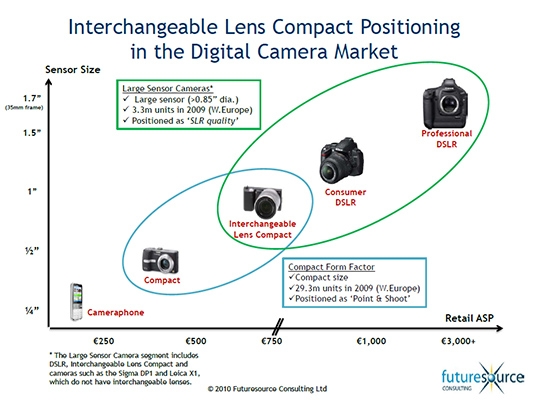 Following the release of a Futuresource industry report earlier this month on the Western European market opportunity for Interchangeable Lens Compact Cameras, James Wells, consultant with Futuresource discusses some of the key issues surrounding this market.

“Since the end of 2008 when Panasonic launched the world’s first Interchangeable Lens Compact, Olympus, Samsung and Sony have introduced their own models into this segment. The market was still relatively small last year, with just 80,000 units shipped across Western Europe, compared with 3.2m DSLRs.

“Moving forward there are some factors that will limit growth for the Interchangeable Lens Compact market in the short to mid term, such as certain technological factors that influence camera performance and higher average retail prices compared to entry level DSLRs.

“Another big influence on growth will be whether Canon and Nikon – who currently dominate the wider interchangeable lens camera market – decide to launch an Interchangeable Lens Compact product. Makoto Kimura, Nikon’s president, recently confirmed Nikon will launch a new type of SLR as early as this fiscal year, saying it ‘may adopt the so-called mirrorless structure’. To date there has been no official word from Canon regarding its future plans for Interchangeable Lens Compacts.

“In the short-term, whilst we are expecting significant growth for the Interchangeable Lens Compact market, it will still only reach shipments of 377,000 units across Western Europe in 2010, compared to expectations of 3.3m units for DSLRs.

“Panasonic, Olympus, Sony and Samsung (with a 20% combined share of interchangeable lens camera shipments in 2009) are expected to promote this segment heavily in 2010, particularly at the Photokina show in September in the run up to the important fourth quarter period. The long term aim is to try to break Canon’s and Nikon’s stranglehold on the interchangeable lens camera market. Suffice to say this will be an interesting space to watch over the next two to three years.” 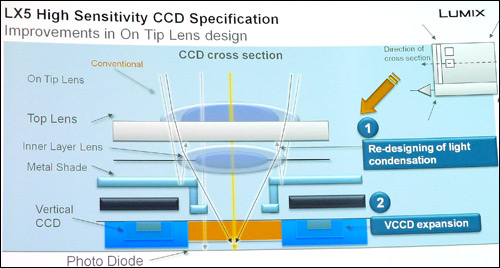 ) may give us some hints about the next generation of MicroFourThirds sensors.

According to Panasonic the sensor has a new design which allows to capture more light for every single pixel. Quesabesde also noticed a better chromatic noise control (but this maybe depends form the new Venus engine). You can judge the difference between the LX3 and the LX5 sensor by looking at those images: http://www.quesabesde.com/camdig/noticias/Lumix_LX5_muestra_02g.jpg. Panasonic itself claims that the new sensor is noiseless at ISO 800 which (if true) is a very good news considering that the sensor has a much higher pixel density than current MicroFourThirds sensor. Panasonic also said that the LX5 sensor has a better sensivity (by 31%) and saturation (38%) and greater dynamic range compared to the older Panasonic LX3. More image samples have been posted here at DPreview and by RealityScanner on flickr 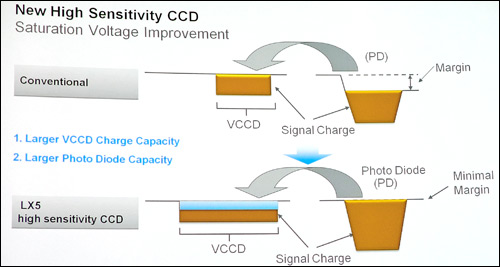 P.S.: You can now preorder the Panasonic LX5 on Amazon 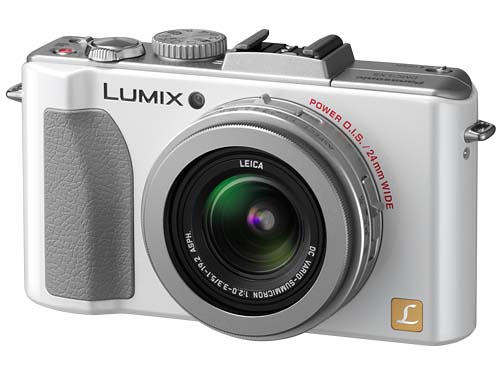 Preorder the cameras on Amazon US:
Click here to get the LX5 ($499 and white model not available yet)

First videos made with the LX5: